The price of a chair.

The day we drove up from the overwhelming crush and chaos of Port au Prince to the town of Degand Haiti, it was like taking blissful step back in time — except that life isn’t quite so blissful for the people living here. Just 10 kilometers from Haiti’s capital of 1.2 million people, Degand is another world — a poor farming community with breathtaking ocean views, crisp clean air, and people who are spirited and hard-working. 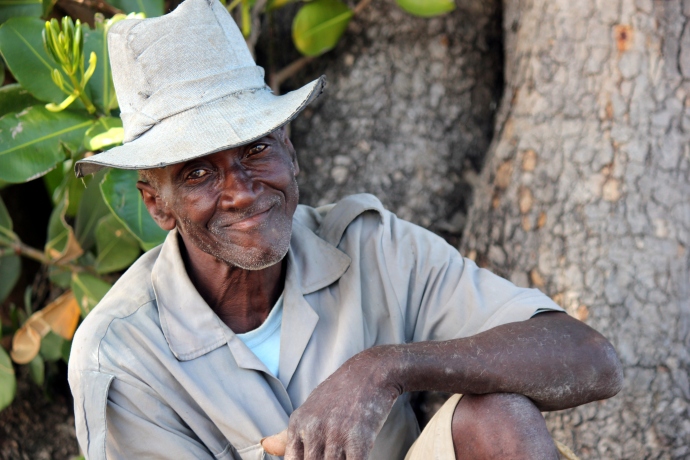 The town seems idyllic and avocados grow in abundance here but the land is dry and rocky, and water is 4 to 5 kilometers away–which means girls usually walk about 3 hours a day hauling water. Degand was also hard-hit by the earthquake, with many families losing their homes, and many others taking in relatives from the city who were now homeless, too.

The long walk for water (this is just the beginning).

We were in Degand to celebrate the opening of the new Goat-Breeding Center built by Heifer International, in partnership with the community organizers of MOPLANDA — and it was a big day for the town. 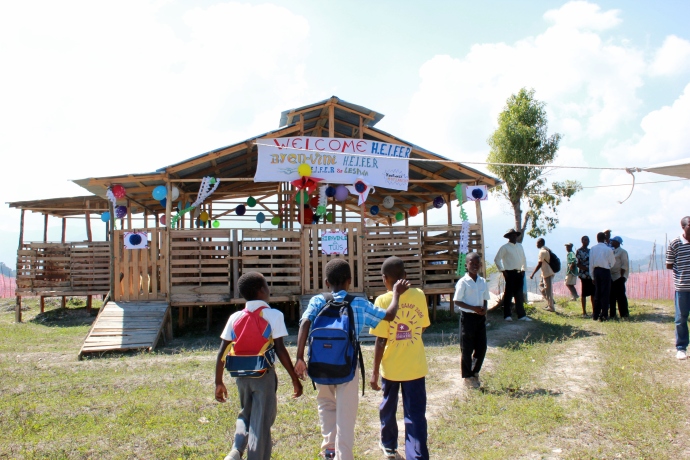 My favorite part? The balloons read: "It's a boy!"(probably because all the "It's a goat!" balloons were sold out).

Heifer has been working in Degand since May of last year, starting with the gift of 25 goats to the neediest families, and the construction of 20 cisterns that are shared by 4-5 families each. The cisterns are expensive ($1500/apiece) but they have a transformative effect on the community. For one thing, girls can stop walking for water and start walking to school — and in Haiti, education is prized above all else. Families will sacrifice almost anything to get their children in school.

The problem in Degand was that even with the gift of goats to a few families, the town had no way to pay its 6 schoolteachers their stipend of $40/month to teach. (Obviously, the government provides very little assistance with education, and 80% of Haitian schools are privately funded.) So Heifer helped the community build this commercial Goat Breeding Center as a community enterprise that will eventually house 60 goats, with proceeds of the sale of the animals going to support the school. It’s a different model for Heifer — a bigger investment, but with a far deeper impact on the overall economic viability of the community.

For the price of $5,000 to build the breeding center; 2 robust Boer bucks at $350/apiece; and 25 female goats at $60/apiece, Heifer has invested a total of about $7,200 in a quest to geometrically improve the quality of Degand’s goat stock, and enable the community to support its own school– as well as other projects it decides to undertake (like a Tool Bank where farmers can get loans to buy new tools). And with the sale of the school goats, Degand can pay its teachers …and even buy chairs for the children.

You know you’re in a different world when a simple school chair is a matter of  precious delight.

We loved visiting beautiful Degand and its people so much, we went back a week later and had a totally different but equally moving experience. But that’s tomorrow’s story…