My last two days in China were spent visiting Heifer International projects in Jingu and Fuxing Village … towns that were hit hard by the disastrous 7.8 earthquake that tore a path of destruction 500 kilometers through the heart of Sichuan province on May 12, 2008.

These rural communities raised livestock and fruit, but inside the collapsing barns and houses most of the livestock were killed – along with 68,000 people.

The rebuilding of the Earthquake- Affected area by the Chinese government has been intense, but the Lizhou Poverty Alleviation Bureau chose to work with Heifer for livestock replacement because of its reputation for long-term results. (Or as the Heifer China staff humbly told me, “Our strict standards, high expectations of our farmers, and precise reporting of results make us challenging to work with. But I think we got chosen because we have a reputation for changing people, communities, and the government entities we work with for good.”)

The project started in March 2010  in the two villages (and six neighboring communities) with the establishment of 26 Self Help Groups consisting of about 20 families each. They met weekly to begin trainings in animal husbandry; breeding; group savings; animal barn improvement; Heifer concepts like the 12 Cornerstones in cooperation, sharing and gender equality; and value chain marketing. 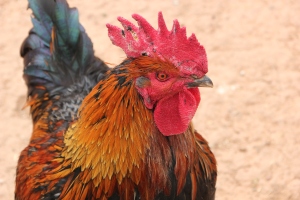 Only then—after six months’ work – did the 505 families in Lizhou receive their animals. Some chose chickens, some pigs – depending on the land they had to raise crops and the labor required. But by the end of 2011, those original 505 families had recruited 505 more families to form new SHGs, passed on their trainings, and are getting ready to pass on the gift of animals in June of this year.

And what a gift!! The pigs, in particular, are beauties.

The new breed of sows provided by Heifer are more shapely than the local stock (these are the words of the villagers, but I’m not taking sides as I kind of got attached to the local babe on your left), they grow heavier faster with more meat and less fat, and when they do reproduce, the sows have 13-16 babies in a litter. Unfortunately, there have been some fertility issues with the new breed and Heifer vet techs are working to encourage the farmers to feed the sows carefully with only raw food, give vaccinations, and keep their barns clean and hygienic to promote pregnancy.

One of the indomitable ladies of Fuxing.

In Fuxing I met with the only all-women’s Self Help Group, as most of the men have left to work in the city, their teenagers are away at boarding school, and the women have been left behind to farm and raise animals. 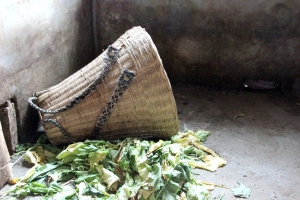 Communally, the women can support one another, meeting once a week to share their stories, discuss animal problems (for instance, when a pig develops a weak hind leg, you don’t just wait for it to die, you treat it with meds and stop feeding it so much protein and no cooked food…good to know!!). The women also work together to maintain the new road into town, clean the village, and build reservoirs to harvest water to get them through the 2-month drought period when they used to have to carry water up to the fields in buckets.

The villages are beautiful – blanketed with yellow fields of rapeseed (for oil), orchards, and neat fields, but the women have despaired of their children moving back here. “Emotionally we want them to come back, but financially, we know they can’t survive here. Our children can’t get used to the hard farm work we do or handle the risk of a failed crop or lost animals.”

“They’ll have an easier, better life in the city,” another mother says.

I ask the mothers if they want to move to the city and they laugh and say in unison, “Never. It’s hard here but we can’t get used to the air and the noise in the city. Maybe things will get better someday and our children will come back to the farm.”

I’ll leave you with this haunting song from the women of Fuxing (sorry it’s dark but we were inside by a fire)!

A few tender words about pigs… 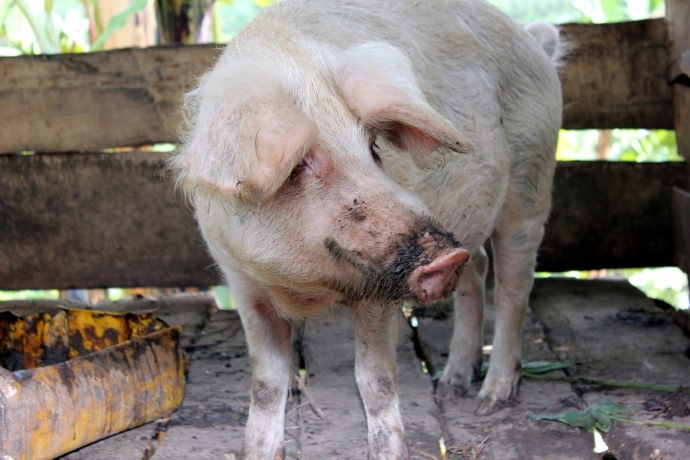 I don’t know jack about raising animals – and I don’t think I’m alone. In fact, it can be said (and yes, dozens of people have said, in various terms of disparagement) that I am not an animal person at all.

You're serving WHAT for dinner?

But the great thing about visiting a Heifer International project is that you learn a boatload about animal husbandry, even if you don’t want to. And while that still may not make you feel swoony about cows, pigs, chickens and goats, it certainly gives you new respect for them. It also makes you realize how utterly removed that we westerners are from any and all sources of our food, despite our utter dependence on animals for life itself. In the developing world, you see on a daily basis how important animals are to communities and how closely people live with their animals. The symbiotic relationship between man and beast is tangible and immediate: we simply can’t live without each other.

Jocelyn gazing at her beautiful pig.

But let’s get back to the pork…

In Uganda, pigs are valued for their meat, their manure, and their ability to produce other pigs – and lots of them. The mommy pig is a sow; the daddy pig is a boar – and piglets can become parents at an astonishing six months of age. Pretty much as soon as they’re weaned, they’re ready to roll. The gestation period for a pig is apparently as precise as a Rolex –and their litters are huge: a sow will often produce 10-15 piglets in one furrow. And they’ll produce at least five farrows in a lifetime. That’s some serious fertility. 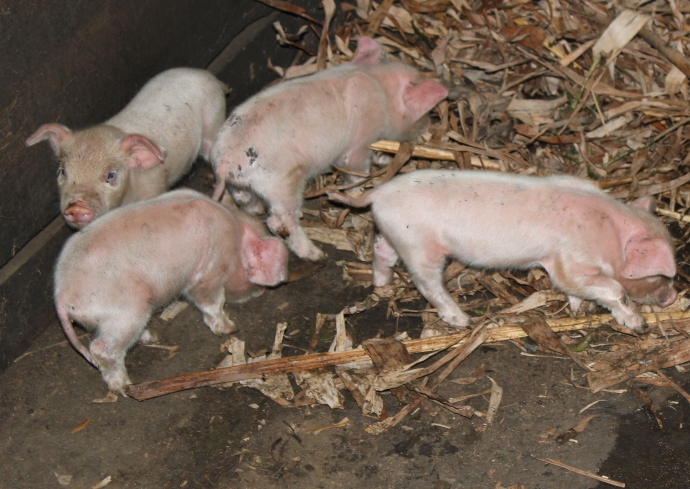 Almost as precious as piglets is pig poop …which can be used to fertilize banana plants, maize, coffee, potatoes, cassava, and all kinds of fruit trees. When you’re raising everything you eat, and there are no stores in the event you run out of Hot Pockets, a better crop isn’t just a luxury, it’s a lifeline. And poop makes a huge difference.

Heifer trainings teach farmers how to compost in six trenches: plant and food scraps are turned over and moved from one trench to the other over the course of weeks, until the sixth one produces beautiful composted soil, ready to be mixed with manure & used as fertilizer.

To produce this glorious rot, pigs eat banana peels, napia grass, elephant grass, food scraps and peels. The farmers must learn to plant and grow the food the pigs need to eat – which is another Heifer training. And farmers need to carefully cross-breed the pigs, so the pig stock remains strong and there isn’t an issue of in-breeding. The Heifer extension workers carefully chart the breeding and bring in boars from surrounding communities to protect the genetic integrity of the animals.

It’s a complicated thing, raising pigs. Particularly when you have to do every single part of it yourself: build the shed, raise the plants to feed the animal, breed it, milk it, sell it, slaughter it, and use its poop to grow more food for your family (and for your animals).

Bringing home the bacon is both remarkably complex and utterly essential.

Even to my eyes, a pig is a beautiful thing.