Our Heifer International trip to Petit Goave got off to a petit late start, because we overstayed at the town of Degand. Which meant by the time we pulled into the lush rural community of Petit Goave, the sun was getting low in the sky and we faced one last hurdle: a watery crossing. 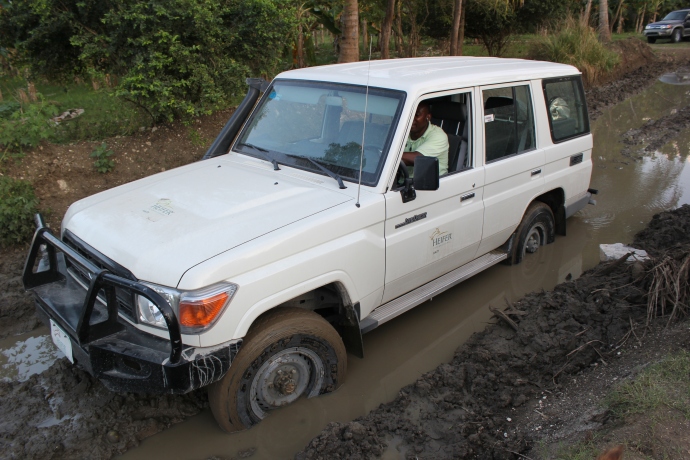 Sona Chambers, ace Atlanta fundraiser and bon vivant, was in the front seat and cautioned Hervil Cherubin, Haiti Country Manger/driver extraordinaire, that the four-wheel drive wasn’t in gear. Dave Anderson, crackerjack international photographer and videographer, and I were in the back, minding our own business but secretly hoping for some action. We got our wish, as the minute we plowed hub-deep into the mud, it was pretty clear we were stuck solid. Pierre Ferrari, Heifer CEO in the car behind us, plunged in to the rescue and we were expeditiously pushed out by six farmers with a lot of muscle.

Dirty, muddy and happy, we traipsed into lovely Petit Goave where the community awaited us.  By now the light was seriously fading and the Heifer folks wanted to get us back on the road before nightfall. But since we were the late ones, we unanimously decided that all the beneficiaries should have a chance to speak, just as planned. And so they did.

Petit Goave is a beautiful place, blessed with plentiful water reminding me, once again, that water means life. This corner of Haiti, with its tradition of dairy cows, is also famous for the fudge (douce macoss in Creole) that I wrote about in my last post.With a candy industry nearby, the more milk Petit Goave farmers can produce, the more income they can generate from fudge-makers. 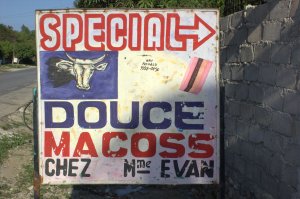 To take advantage of that opportunity, over the years, Heifer has given this community the gift of 50 cows & 2 bulls; 5,000 plantain plants; 600 buckets of bean seeds; 150 buckets of corn seed and 12,000 forage plants to feed the animals—as well as emergency food supplies after the earthquake. These gifts, which have been passed on to other families and thus multiplied, have made a profound difference in the life of the community, as we were reminded of by the people who stood to greet us.

Eddy Exantus, with 6 children, was able to send all of his kids  (not just the boys) to school with income from selling milk. Francois Revel, a bachelor, used his milk income to finish high school, then was trained by Heifer as a vet agent – giving him additional income while he keeps the community animals healthy. Emmanuel Jean has 9 children and been able to send them all to school, thanks to the milk money earned with his Heifer cow. And finally, a woman stepped up: Margareth Doscar, President of the Petit Goave Women’s Group and a single mother of 4.

Kimberly and I snapped to attention as she thanked us and wished us courage, then asked for more training in food processing and micro-loans to finance small businesses of the 45 women entrepreneurs in Petit Goave.

As the light of female solidarity dawned on us (and the sun set for real) Kimberly asked for the wives of the men who’d spoken to come up & be recognized….and before you could say “Gloria Steinem,” there was huge laughter, people excitedly pushing shy wives and mothers to the front, and tales of romance, kids, and 30-year marriages in the air.

I struggled to take notes in the pitch-black and people held up cell phones to illuminate faces, while Pierre talked Kimberly (also shy) into addressing the women, who crowded around her in quiet thoughtfulness.

“Women have always been the backbone of society, and we know how hard you are working, and how difficult these times have been for you,” she said, as Hervil translated into Creole. “I want you to know that the women in America and all over the world care about you, we support you, and we haven’t forgotten you and your families.”

In the dark we could hear lowing and bellowing of the 50 beautiful cows that had been tied up in the clearing. A quarter moon rose over the horizon. As we walked back to the trucks, surrounded by the talking, laughing people of Petit Goave, it was a Heifer moment.

The second half of our first day in Haiti, we drove from Montrouis to the remote town of Ivoire, where Heifer International has a project rebuilding homes destroyed in the 2010 earthquake. Now if you’ve been following my blog for more than a day, you know the confluence of the words “drove” and “remote” is cause for some alarm. 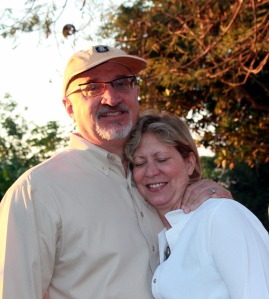 Kimberly safe at the top & reunited with Pierre!

And to be sure, the road to Ivoire (as you can see) was a tortuously steep, cratered-out path that clung feebly to the side of a mountainside for 20 or 30 kilometers, with six of us crammed in a Toyota Land Cruiser bouncing around like popcorn kernels on a hot stove. Poor Kimberly, wife of Heifer CEO Pierre Ferrari, was sure we were going to tumble over the cliff at any second, and unfortunately she was on the side of the truck to get a bird’s eye view of that distinct possibility.

Way up here in Ivoire.

Whenever I’m in a situation like this, I try to take the long view: we probably won’t be hurled to our deaths, we’ll eventually get to the town, and unlike the inhabitants of Ivoire, we’re damn lucky not to have to walk up the hill. And of course, the trip up there was more than worth it – the people of Ivoire are spectacular! 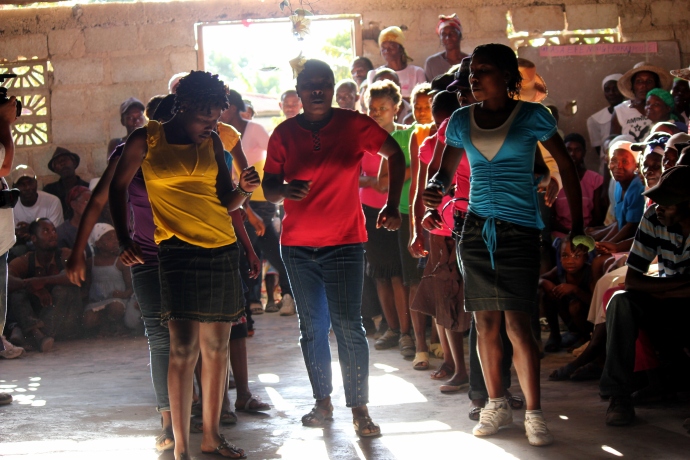 The celebration that greeted us in Ivoire!

Heifer has been working in Ivoire since 2002 – helping the people living here in remote poverty reforest the land with new trees, conserve soil, harvest rainwater with cisterns, get trainings in how to raise healthy animals, and receive new goats, chickens and cows to improve their livestock. But when the earthquake hit, over 270 homes—or 1 in every 10 — in this small community were destroyed. (In Haiti overall, an estimated 250,000 homes and 30,000 commercial buildings were leveled – as well as half the primary and secondary schools and the three main universities.)

Towns like Ivoire are way, way down on the list to receive aid (“We were ignored,” said the community leaders bluntly)– and given the condition of the road, that’s not hard to imagine. But Heifer made the decision to facilitate the rebuilding of 110 homes here because it knew the people, and how organized and dedicated the community was.

“When we saw that people were willing to walk 3 hours carrying tin for roofs of houses, and haul bags of sand and cement up on motorcycles, we knew Heifer had to help,” Ewaldy Estil, the Heifer Northern Regional Coordinator, told the packed congregation that had gathered to sing, dance, and ceremoniously present us with heaping baskets of grapefruit, cabbages and sugar cane.

“When I am here, I forget all about the road conditions, because you inspire me with your community, your solidarity and your faith!” Ewaldy went on – which was entirely true. There was no way you could not be happy you were there…and not wish you could do more to help these people who are so intent upon helping themselves.

The face of resilience

Everyone in Ivoire gets involved!

Even as I write this, Pierre Ferrari, Heifer’s CEO, is scrambling to convince donors to invest the materials (and transportation!) to rebuild 160 more homes in Ivoire. Each house requires 28 bags of cement and 28 metal sheets, and beyond that, Heifer pays four categories of contractors to ensure quality of construction: brickbuilders ($22); mason ($89); carpenter ($38) and welder ($8), for a total cost of $900 for a 250-square foot house. From there, the homeowner and neighbors finish all the other work.

Once you see Ivoire and meet the people who somehow remain joyous and hopeful despite the strife, setbacks and isolation, it’s impossible to forget them.

And the road down? It was a breeze.

On my first day in Haiti, I made the not-so-brilliant deduction that traveling with Heifer CEO Pierre Ferrari and his adorable wife Kimberly Youngblood; Heifer VP/Director of the Americas Oscar Castaneda; and Heifer Haiti Country Manager Hervil Cherubin, put me in a whole new league.

Instead of sidling into town relatively unnoticed (except for being blindingly white), I was now part of fancy celebrations and major attention. Like our first stop: the opening of Heifer’s big new Goat Breeding Center in Montrouis (pronounced Mont-wee) on the beautiful northern coast of Haiti, which represents the first step in Heifer’s $18.7 million plan to ignite Haiti’s rural economic recovery.

When you’re trying to make some developmental headway in the confounding conundrum that is Haiti, the prospect can be so daunting, it’s hard to know where to start. But often, the most obvious place is staring you right in the face. 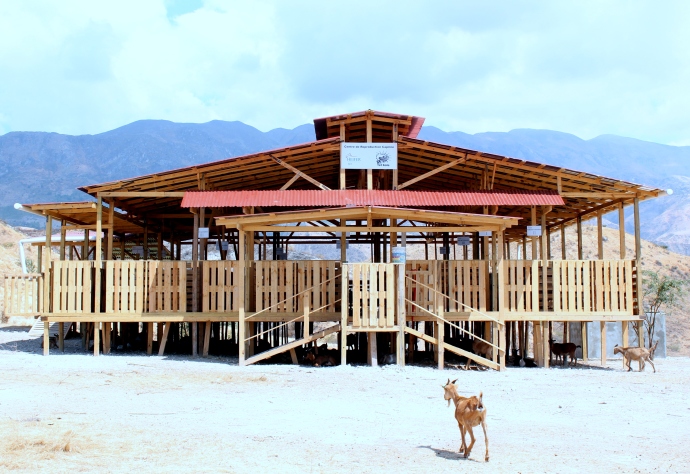 And that is exactly where Heifer International is putting its stake in the ground: with the basic development tools of animals, food, and farms through its new REACH program (Rural Entrepreneurs for Agricultural Cooperation in Haiti). When you look at the numbers, it makes all the sense in the world. Out of about one million small farms in Haiti, 85% raise poultry, 65% have goats, 55% cattle, and 35% pigs. Yet, those efforts are not coordinated, the stock is poor, and markets are far-flung and inaccessible to farmers. 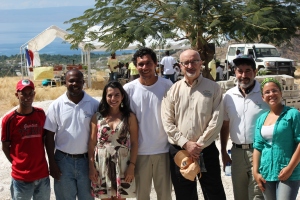 So Heifer partnered with Tèt Kole Ti Peyizan Ayisyen (Heads Together Small Producers of Haiti), the oldest peasant group in Haiti born covertly in 1970 during the Duvalier dictatorship, and with MST Landless Workers’ Movement of Brazil, to build this 270- square meter, 180-goat breeding center and 10,000-chick poultry center, along with a water-capturing system from a source 5.5 kilometers away.

The centers are beautiful (built with recycled pallets!) but the really gorgeous thing is what they represent for the future: A better breed of goats and chickens that can incrementally improve livestock bloodlines. The coordinated training of Community Animal Health workers who can teach other farmers to grow forage crops, fruit trees, compost, and breed their animals in the healthiest, most productive way. And the development of value chains to bring farmers together to establish new markets and increase their incomes by 100%.

Heifer’s ambitious plan is to select the most successful and entrepreneurial farmers (at least 30% of them women) from these training programs and provide them with the animals and business acumen to start 100 goat and 50 pig breeding centers throughout Haiti, with an ultimate reach of improving the lives of 20,250 farming households. Now that’s reproduction at its finest!

Still, there’s a long way to go before Haiti comes anywhere close to being able to feed itself. Even before the  $31 million of agricultural damage in the 2010 quake, and the 70% loss of its crops in the 2008 hurricane season, Haiti was importing 51% of its food, at a crushing expense to its 9 million people. Heifer needs to raise $13 million to make this program a reality, and then there are five years of hard rowing ahead.

Even feeding animals is a challenge in Haiti.

But to paraphrase Robert Frost & the Nine Inch Nails, the only way out is through.

As I was standing on the top of the Montrouis cliff overlooking the ocean, listening to the wind and hearing the bleating of goats, imagining the magic of water soon transforming dry grasses into crops, that prospect didn’t seem so bleak.

Not really bleak at all.