The mighty ceiba tree is not supposed to be blooming.. but the climate is changing.

On Day 3 of my trip to Ecuador, we drove up from the watery coastal towns of El Oro province to spend the night in Loja Province, in the crackly dry forest town of Vega Alta on the very border of Peru. The environmental contrast was stark, particularly as this was the very end of the dry season and every blade of grass seemed dry as kindling. 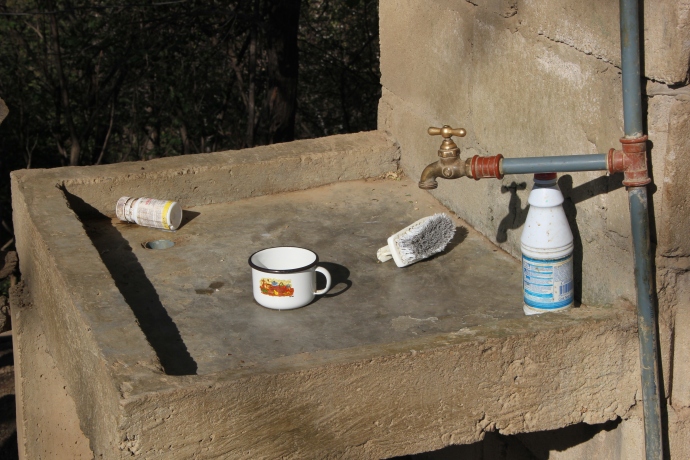 Our host family, headed by Rosanna Apollo, is part of 26 families (most of them related) that live in this sparsely populated town where land is plentiful and cheap, and goats outnumber people by about 30 to 1. 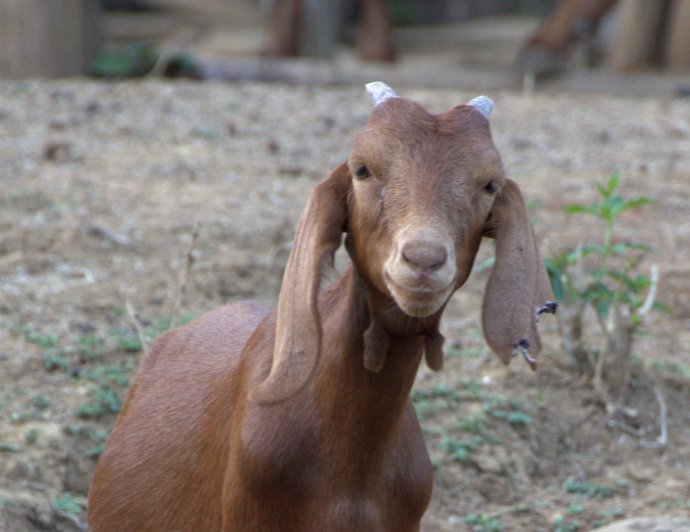 Rosanna and her granddaughter Cecilia cooked us a beautiful lunch… 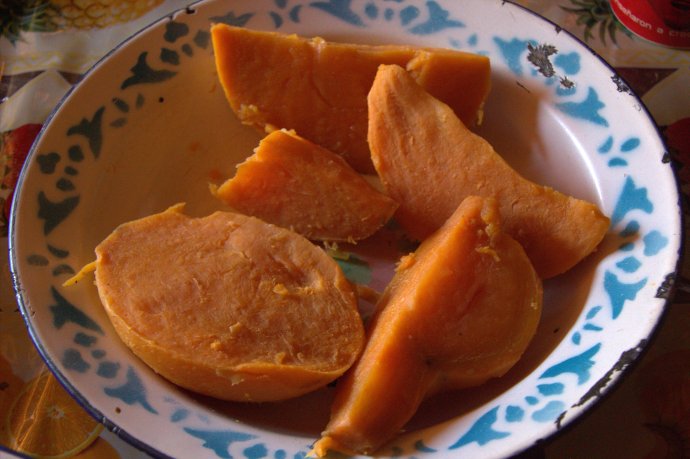 …then we walked to her brother Santos’s house and up, up, up through the dry forest to see the town water supply and irrigation well that Heifer has helped to provide. 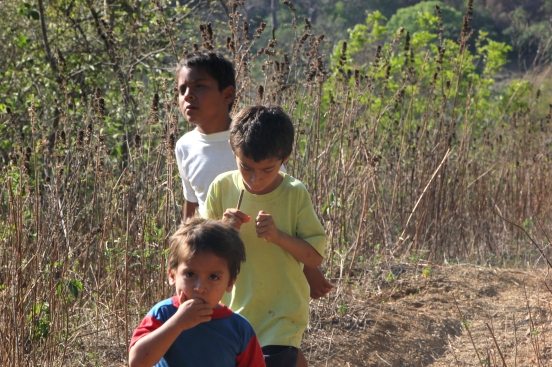 The Santos boys walking through the dry forest.

The challenge in Vega Alta is water, pure and simple. These woods used to boast millions of hardwood trees, before agricultural clear-cutting and burning stripped the mountainsides up to the very summits. 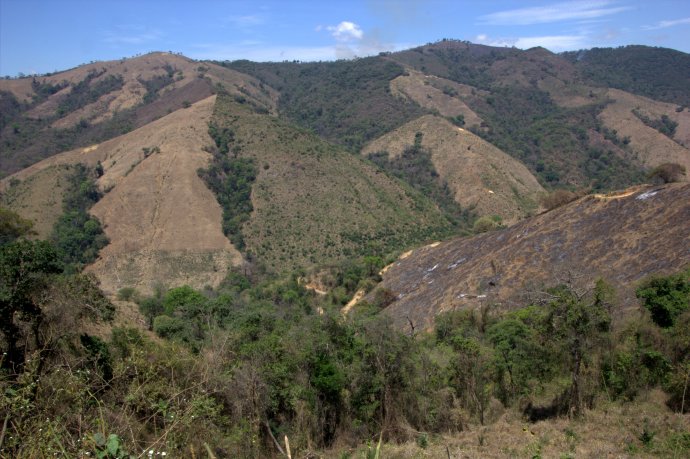 (You can see the burning hillside on the right.) 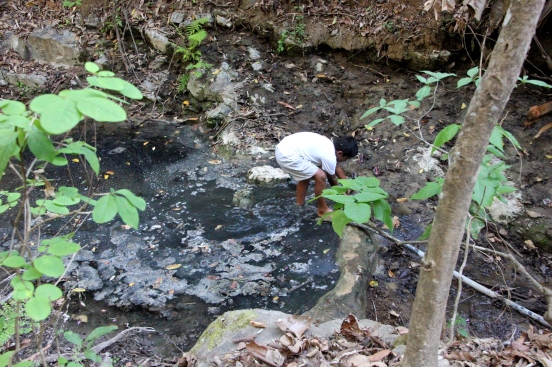 Caritas Allemagne, a Catholic charity, built the big irrigation system that provides metered water for 60 Vega Alta families from a source 13 km away, but it’s the small irrigation pump that Heifer invested in and 60-year old Santos put in himself that has created a small garden of Eden here. 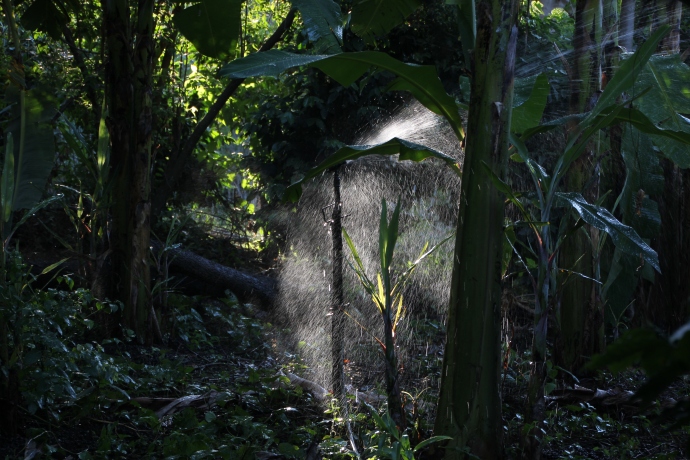 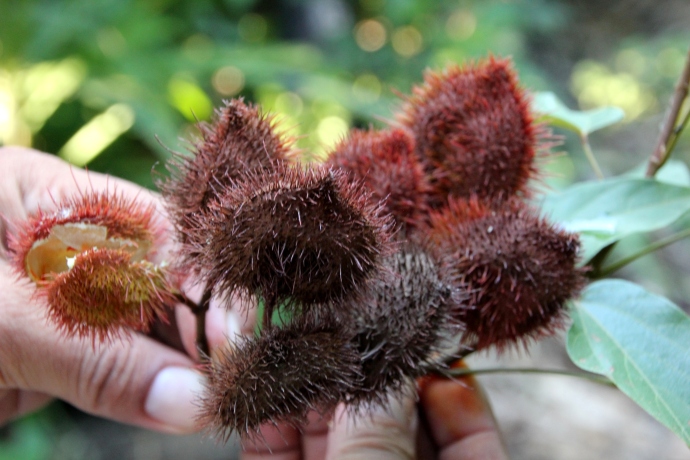 Achiote, also called the “lipstick tree,” produces seeds that are used in food coloring and flavoring.

With irrigation and the manure from his goats, Santos has increased his farm’s production by 300%  –and that’s no small potatoes. 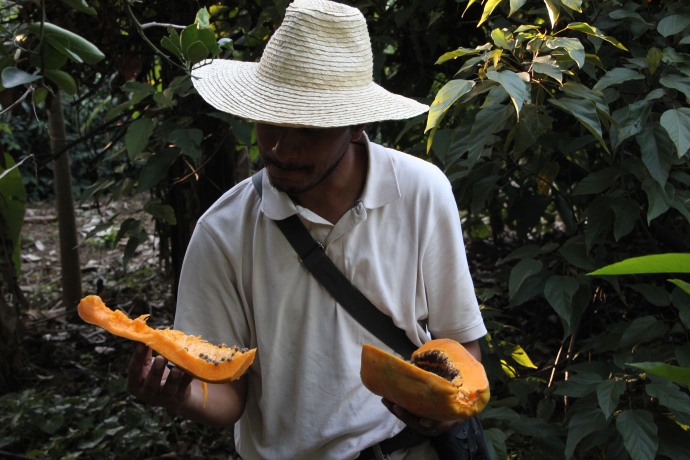 As the dry forests across Peru, Bolivia and Ecuador grow ever drier and water grows ever more precious, Heifer irrigation & agro-ecology and Heifer livestock may well make the difference between children here eating .. or not. 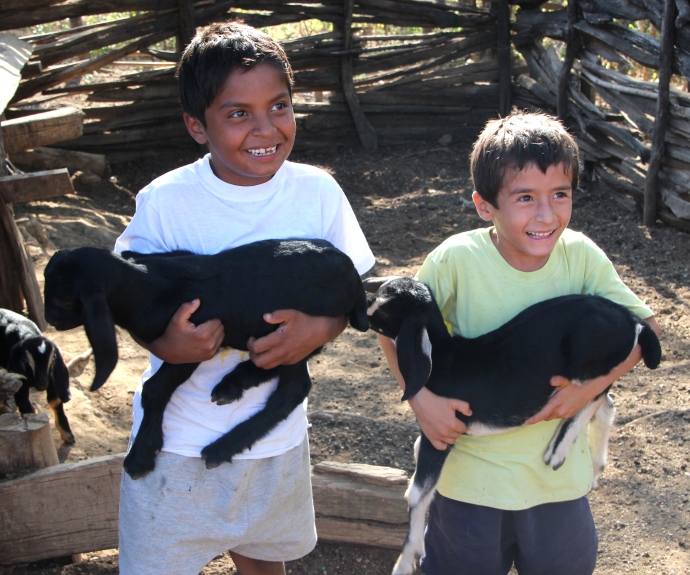 That night, after we ate a beautiful meal of vegetables and fruit, (but went without a shower because there was no way we were going to use more water), I had my computer open to show everybody their photos, and Rosanna and her family began looking over my shoulder at the photos of farmers around the world. 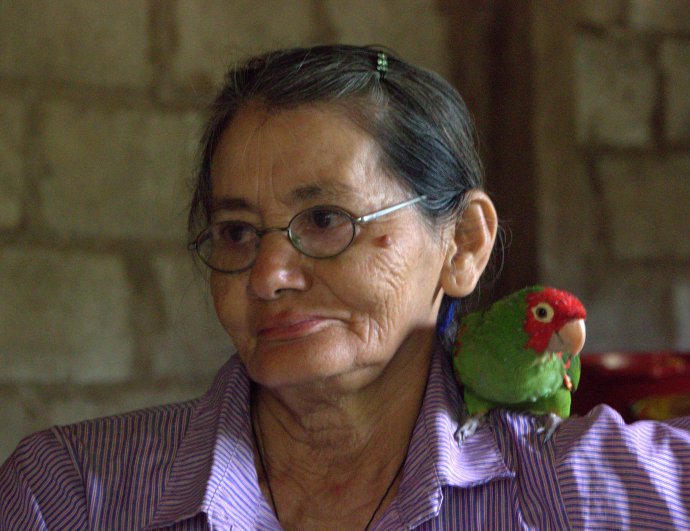 They were so intrigued to see the crops people were growing in Haiti, in Cameroon and in Vietnam (it seems everybody, everywhere grows cassava)… 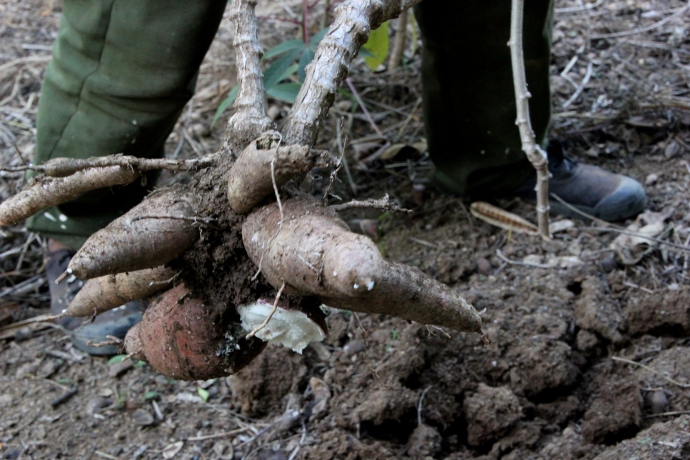 … and they could see that they were hardly the only poor people working hard in the world. They asked a hundred questions about the people they saw in my photos… 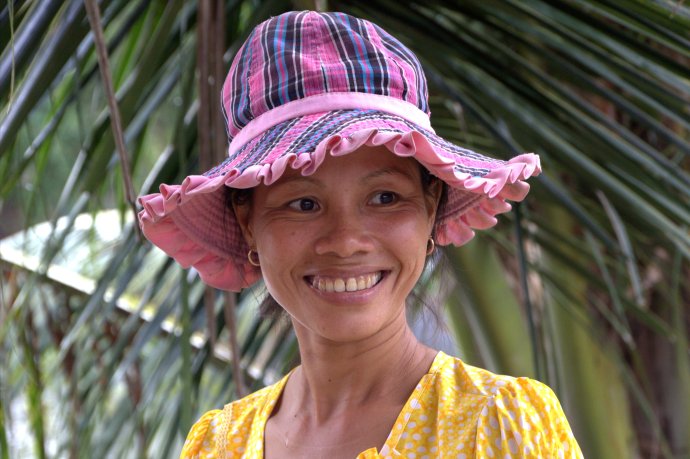 They all loved Trinh from Vietnam — her smile, her hat… and her giant Black Tiger Shrimp!

…and once again I cursed myself for being such a language laggard, and thanked heaven (and Heifer) for Michelle, my awesome translator. As we fell asleep that night on their beds they’d generously offered us, we prayed we wouldn’t have to get up in the middle of the black night to use the dry latrine out back (another Heifer innovation!) and that their pet parrot would clam up until dawn. 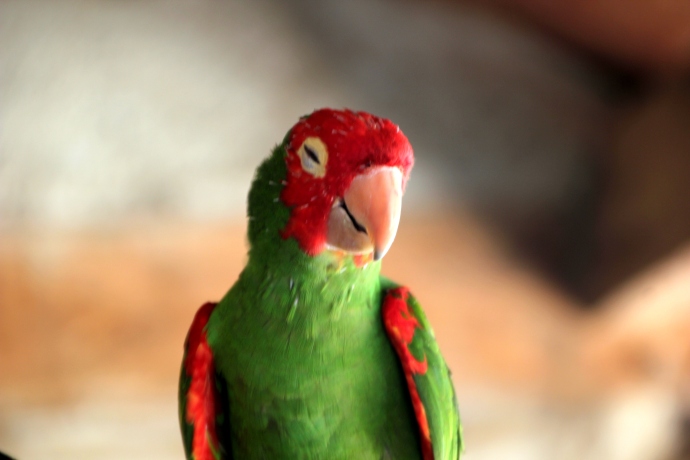 Our prayers were answered! And in the morning– after a beautiful breakfast that was 10 times what we could eat — 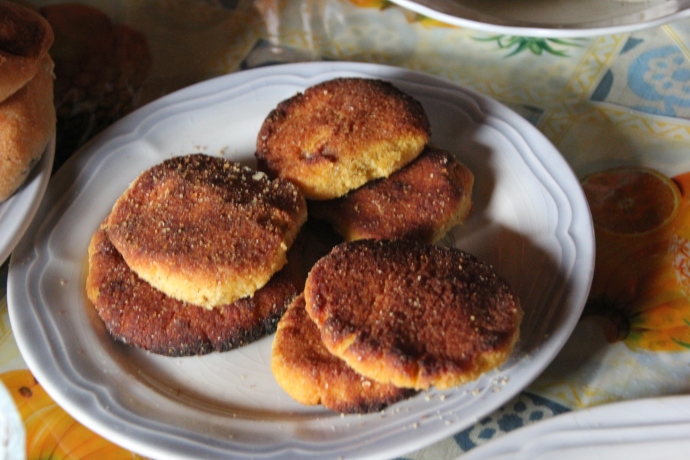 …the hardest thing was saying goodbye. 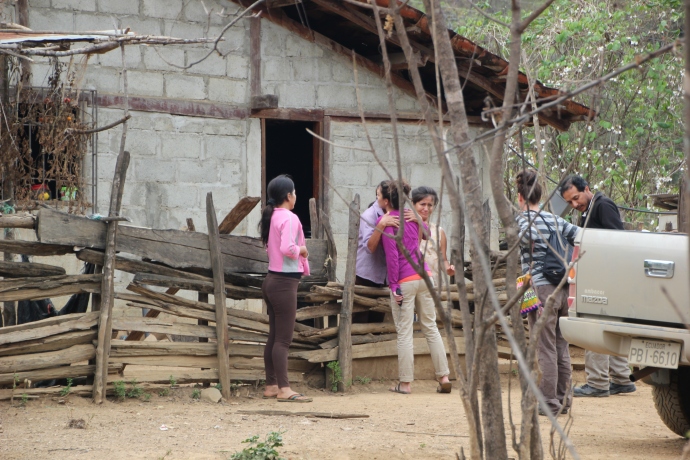 But I know these folks in Vega Alta are in good hands with Heifer folks like Leonardo Mendieta to look out for them. 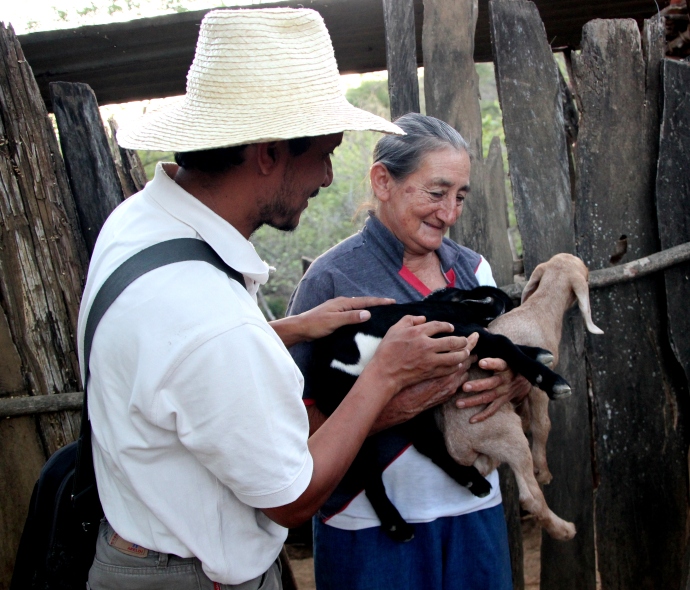 And I’ll just pray the rains will come. 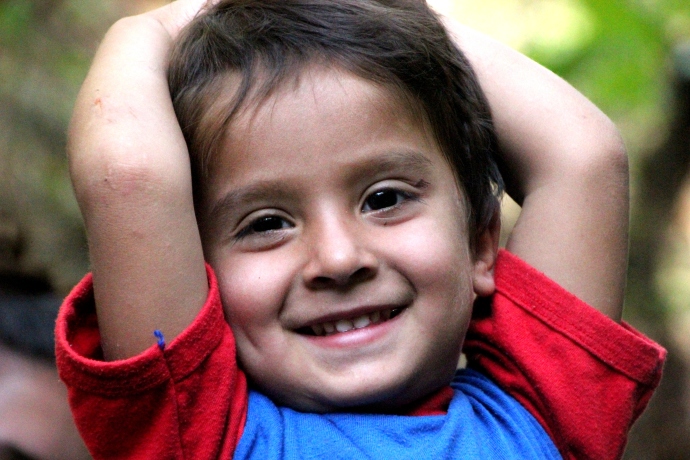 MERRY CHRISTMAS TO ALL … AND TO ALL A GOOD NIGHT!