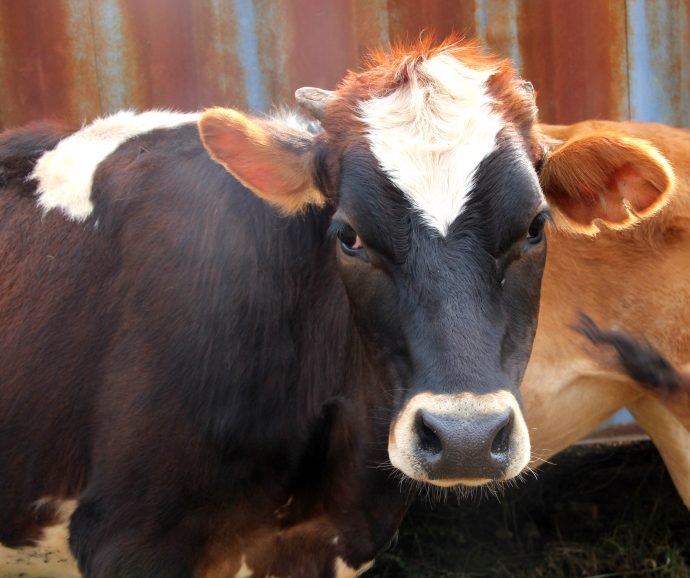 Rwandans love cows. They have songs about cows, they have dances, their whole culture is based on the love of the cow.

The beautiful umushagiriro (cow dance) — I guess those are their horns.

And Rwandans are infinitely patient and gentle with their cows — even when they are being kind of .. pushy.

This Heifer heifer walked right into the ceremony, butted the speaker, went for the drinks & nobody batted an eye.

So it makes sense that the Rwandan government would partner with Heifer, an organization named after its favorite animal, to help 6,382 families in the poor rural district of Kirehe earn a living, improve their land, and feed themselves. It’s part of the government’s national initiative called A Cow for Every Poor Family — that remarkably (well, not really) is based on Heifer‘s beautiful training/giving/passing on model.

Why a cow? I asked Kirehe veterinarian Dr. Jean de Dieu Niyitanga that question and he had this succinct answer, “Cows mean milk and money.” Then he waxed poetic and scientific about what cows need to thrive. For someone like me who thinks a cat requires far too much attention, raising a cow sounds like an inconceivable amount of work. So I asked him to elaborate.

“First you have to love your cow, because if you love your animal, you’ll treat it well, feed it well, and keep it clean and healthy.” Okay, but what does that exactly mean?

The cows Heifer gives to poor farmers in Rwanda are pure breeds, either Jersey cows (brown) or Friesians (black & white). They produce a lot of milk (up to 30 liters a day) but they also demand a lot of food– about 1/10th of their weight in food a day in grass, cereals and legumes that the farmers must grow and harvest. Cows also need a salt lick to provide calcium, potassium and sodium to replace the minerals lost when they are producing milk.

Like any nursing mother, heifers drink a lot: 50-80 liters of water a day, depending on their weight, and that also has to be carried on somebody’s head back to the home.

Cows are big, gentle animals but they require shelter from the elements. So before getting a cow, every participant has to build a shed with 6 bags of cement (@$16/bag) provided by Heifer for a concrete floor to keep the cow’s feet out of dung, wet mud, and to facilitate manure-collection. They’re also given aluminum sheets for roofing – and required to pass on the same cement & aluminum when they pass on the gift of the cow to another poor farmer.

Then there’s the issue of keeping the cow clean: the shed needs to be shoveled out at least once a day, and the animal washed with soap and water twice a week (more water to carry). Cows must also be sprayed to protect against flies and ticks that can give them theileriosis, a tickborne disease that can kill them if left untreated. And the heifers are always watched closely for mastitis – or they can permanently lose use of a teat.

My brain was whirling with the possibilities for bovine disaster, but to Rwandans a cow simply means milk, money and manure. One cow will produce 3 tons of manure a year – and that is hugely important to the farmers planting their crops in the over-cultivated, poorly producing soil in Kirehe. Farmers report a 75-100% increase in ag productivity with the addition of cow dung– and that’s no small potatoes.

So, how has a cow specifically changed the life of somebody like Alfred Nsengimana? After Alfred had a home visit and was designated as able to raise a cow, (if you don’t have enough land or strength to take care of a cow, you’ll first be given goats or pigs), he built his shed and received the 182 hours of training that Heifer gives all participants – to make sure they know how to breed, lead, raise and take care of the animal.

After those six months of training, Alfred received a pregnant Friesian heifer, it gave birth to a female that he’s passed on to a neighbor, and now Alfred is earning $50/month from the cow’s milk – in a country where 60% of the population earns under $1/day. With that milk money (I love this entrepreneurial spirit so much!) he bought more goats and rabbits that are easier to raise and quicker to sell than cows, if the family needs money for school fees or health emergencies.

Then, Alfred dug a cistern in his back yard and he is also harvesting rainwater from the roof –so his family can make fewer trips to the town well to carry water back on their heads.

Water harvesting with a plastic-lined tank — how clever!

With milk to drink, meat to eat, and money in the bank, Alfred & his wife put a new cement floor & walls in their house—a real luxury. He would like to keep at least two cows, because then he’ll have enough manure to qualify for a bio-gas unit (half paid for by the government) that will mean they don’t have to collect and burn firewood and can cook in half the time.

Biogas – a giant leap for woman-kind: no collecting wood/cooks in half the time!

Alfred’s neighbor Jean de Dieu Habayarimana is 24 years old and an orphan responsible for raising his two younger brothers. He doesn’t have land to grow forage for a cow, so he received the gift of 2 pigs from Heifer last December and proved himself so good at raising them, he was given the stud pig for the community – which means that he’ll get 1 piglet from every brood his pig sires.

If you’ve got no land for a cow, take the pig!

This Kirehe Project is a massive undertaking, requiring a daunting amount of work from Heifer (home-visiting every prospective family and giving 182 hours of training to each beneficiary), the government, and all the local organizations across five pilot zones in 12 sectors of the Eastern Province. But 1,000 heifers have been already given in 2011 (and 360 passed along), with 1,145 more to be given this year (plus 2,000 South African Boer goats and 562 purebred pigs). That means that families like Alfred’s will be given the chance to take this opportunity and leverage it to feed their families, earn a living, double their agricultural productivity, and climb out of poverty.

Makes me feel like hollering Oyee! Amata Iwau Kuruhimbi, which means something like Let us always have milk in our homes!