Posted on February 8, 2012 by Betty Londergan

After the dust and dryness of Ixcan, it was pure pleasure to arrive in Cunen, a verdant valley in El Quiche, Guatemala where Heifer International has had a project since 2006. (Not only because Cunen is beautiful, but also because it meant we could get out of the car we’d been bouncing around in for 4 hours).

The Cunen project is the work of 3 local organizations with Heifer, and there to greet us was Maria Cruz, a lovely 36-year old Mayan woman who has been the Heifer technician, animal-whisperer, and trainer in this area for 10 years. Although the Cunen project has been “weaned” and is on a maintenance schedule, Maria still travels here once a month by bus to check on the animals, answer questions, and visit the homes of Heifer’s beneficiaries – of which there are 36 in this town (and over 500 in the project). In fact, she is so devoted to her work that when she was temporarily laid off due to a cutback in Heifer donations, as a result of our economic downturn (hint, hint), she still took day and night calls about animal fevers and diarrhea from the four villages she works in. Apparently, having animals is about as time-consuming and worrying as having children (except they’re more grateful and don’t talk back). 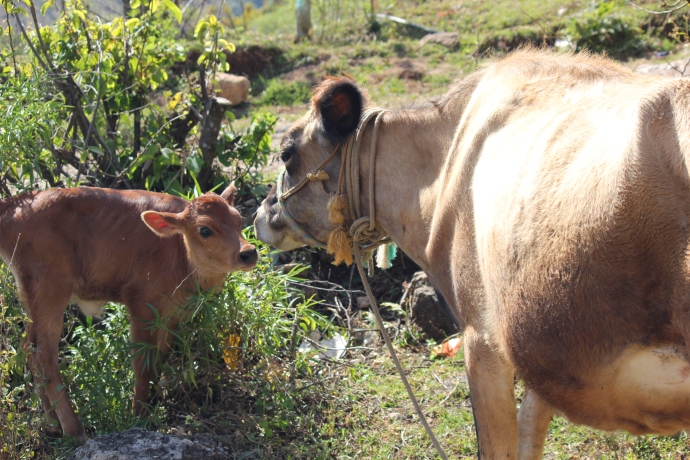 In Cunen, even after the Heifer project has ended, the gift still keeps on giving. The cow above was received by Don Serbando Vasquez, director of the local association, and had a female baby that was passed on to Don Manuel Vasquez (whose 7 children grew up drinking its milk), and that female just gave birth to the cutie-pie new baby above. Cows live for 15-18 years and will have 5-7 offspring in their 13 years of fertility, so Cunen will see several more new generations of Heifer heifers—each of which will benefit a new family.

As we walked from farm to farm, we jumped over creeks bubbling down from the surrounding mountains, bringing plentiful water to the fields that were everywhere springing to life with alfalfa, beans, snow peas, onions, oats, snap peas, corn, and napia grass. Lemon, orange, papaya, avocado and lime trees grew in orchards, and sheep and goats happily munched on forage crops in the tidy Heifer sheds Maria had taught the farmers to build. 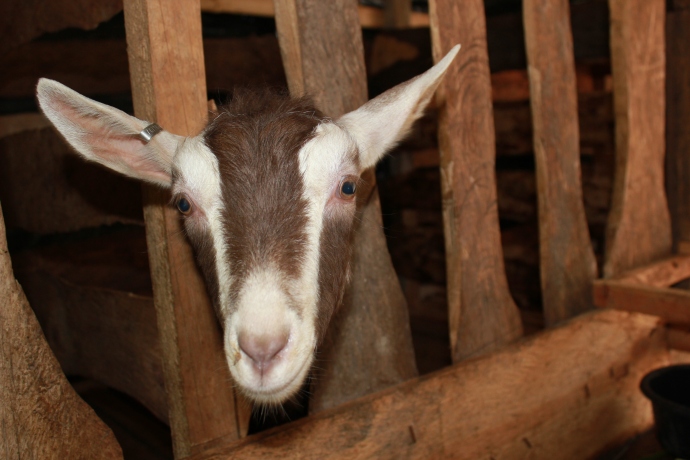 These sheds allow the farmers to efficiently collect the animals’ manure and urine – so they can make rich compost for their fields. Heifer trainings promote organic farming to liberate farmers from having to buy expensive, often dangerous chemicals and to protect the environment. Basic composting is enhanced with the help of some crazy California red worms that eat through the manure like Pac-Men, reproduce like rabbits, and are also passed along with the gift of an animal to a new family.

Speaking of rabbits, the Cunen families we visited also had plentiful pens of rabbits. These bunnies, like all the animals from Heifer, were bigger, better breeds that are chosen to improve the local stock, generation after generation. And because rabbits have 5-7 babies each litter and can have 7 pregnancies a year (yep, that’s 50 babies annually!) … that’s a lot of improvement really fast.

The people of Cunen were so likeable, friendly and eager to share their stories with us, it was hard to leave. Don Serbando gave us a parting speech, which he asked me to share with you:

“We are very grateful to the Heifer donors. We know how much we have been helped and we don’t take it for granted. Because of the gifts you have given us, our children will grow up healthy and smart. We are living the Heifer dream.”

It’s a dream that involves never-ending work and a boatload of struggle, but they have water. And animals. And hope.

Wish you were here, too!

Guatemala is a beautiful country – incredibly mountainous, over 60% indigenous, and poor in everything but spirit.

In the past three days, I’ve seen Heifer projects working to stop deforestation of the rainforest, find better ways of growing maize for these “people of the corn,” and seen the transformative power of animals in a community. 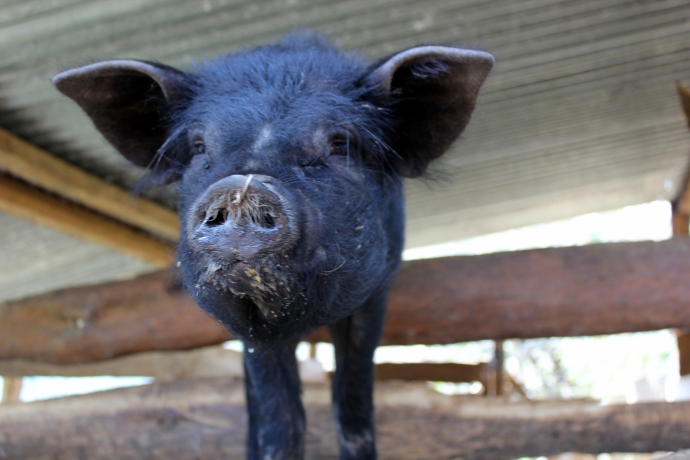 But since I’m working like a true Heifer person (or like the campesinos they work for), I’m on the road at 7 am and not back until about 10 p.m., and I haven’t had time to stop and write. 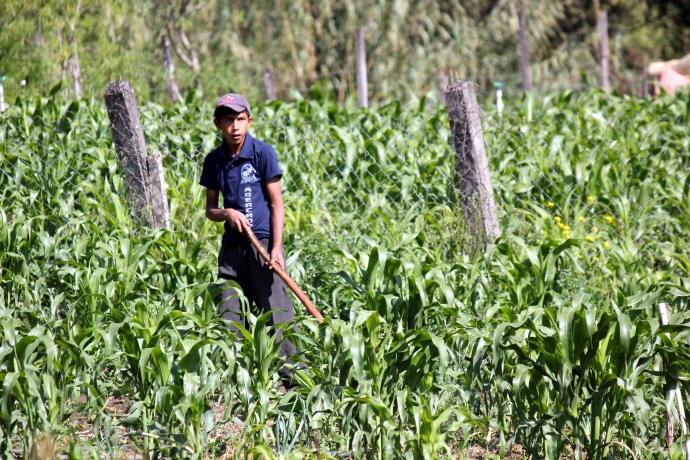 Today I’m going to the countryside outside Huehuetenango, and spending the night with a family in a seed bank project… yippee!

I’ll be writing my stories this weekend in the lake area of Atitlan.  Until then, here’s a small photographic taste of Guatemala.

Travel is so exciting!

Can you see the P.M. mistake in this picture? Me neither.

For instance, this first trip of my Heifer 12 x 12 blog project started off the night before I left when (at 2 a.m. as I was still watering plants and folding laundry), I switched my husband’s i-phone alarm from 6 am to 6:40 so I could get a few more minutes of sleep. And then, when we woke up at 7:40 completely alarm-free , we had lots of exciting words between us before we even left for the airport for our 9:50 flight!

When we arrived in Guatemala City, we were met by the lovely Heifer Guatemala team of Vivian (who handles all logistics & communications and speaks beautiful English) and Byron, the country projects manager, who is an engaging, adorable guy and an admittedly cautious driver… which he proved on a 4-hour drive to Coban, a city in the mountains 120 miles from the airport.

Along the beautiful drive through Guatemala’s mountainous backbone, we stopped at an overlook behind a bar, so I could take a photo, and as I was snapping this very shot …

.. an overserved patron stepped out behind me and wasted copious amounts of hard-earned Gallo beer on the pavement about 2 inches from my feet. Precious memories…

And when we finally stopped for lunch in a classy restaurant, from across the crowded room I found myself mesmerized by the gaze of a small, dark stranger –and that was really exciting. 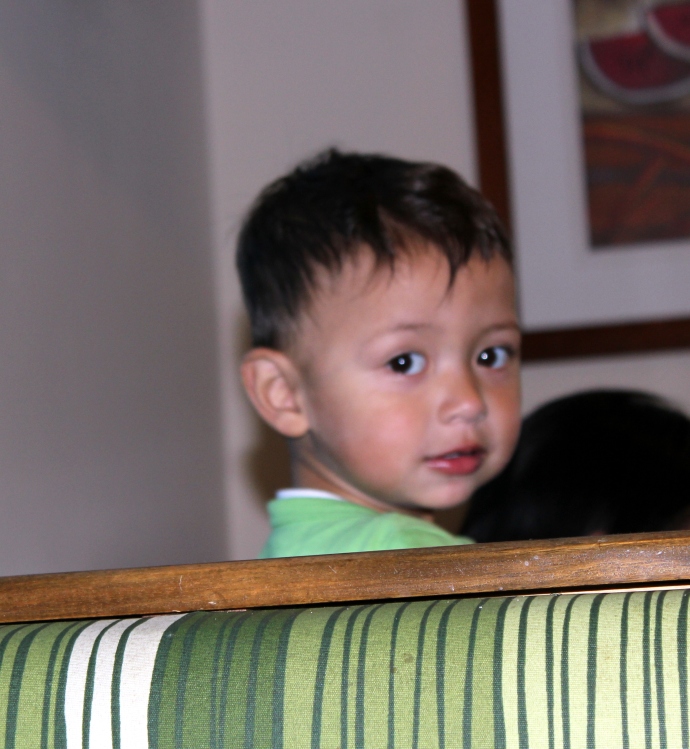 I’m telling you, this inaugural trip is starting off just beautifully … can’t wait to tell you about the cloud forest, campesinos and compost we encountered yesterday!! Stay tuned…