Posted on September 26, 2012 by Betty Londergan

The first day after I arrive in a country, I’m pretty much in a semi-delirious jet-fog. So when my trusty  Heifer Armenia guide/guru Vahe told me we would be driving two miles north of the capital city of Yerevan to visit a bunch of teenagers, I was … speechless.

Inside Hairavank Monastery at Lake Sevan

We started at beautiful Lake Sevan – Armenia’s largest lake that is surrounded by lovely dun hills and ancient monasteries. These rural communities are challenged by high levels of unemployment and poverty, aging Soviet technology, low agricultural productivity, and for teens: the absolute lack of anything to do.

After 70 years under Soviet rule, Armenia is still shaking itself awake from the soporific habit of socialist dependence. In 2002, Heifer’s dynamic country leader Anahit Ghazanchyan decided to kickstart that change with a clarion call to those most likely to respond: the youth of Armenia who are open to new ideas, full of fearless energy, and eager to flex their entrepreneurial muscles.

Heifer’s youth project, called YANOA– Young Agriculturalists Network of Armenia– is a huge undertaking, touching the lives of 4000 youth in 29 rural communities. In Lake Sevan alone, YANOA has produced 3 generations of kids who have been through a rigorous after-school program that teaches kids practical life skills in any one of 7 Directions: Animal Husbandry, Business Development & Management, Ecology, Health Education, Civic Education, Public Relations & Journalism, and Logical Thinking. It engages them in their communities doing everything from publishing newsletters to fixing holes in the street; debating gender issues to influencing town policies, starting small businesses to raising animals.

The sweet faces of the future of Armenia

YANOA is taught and managed by community volunteers like Osana Sahakyan who follow an established Heifer curriculum with the kids for three years and take them through a remarkably sophisticated and hands-on learning process that ultimately earns them the gift of cows, fruit trees, worms, seeds, or seed money from a $22,000 revolving business loan fund. Armenian kids respond to the opportunity like thirsty plants soaking up water; I saw the results in Metaqsya Matevosyan and the adorable entrepreneurs of New Original Beautiful. 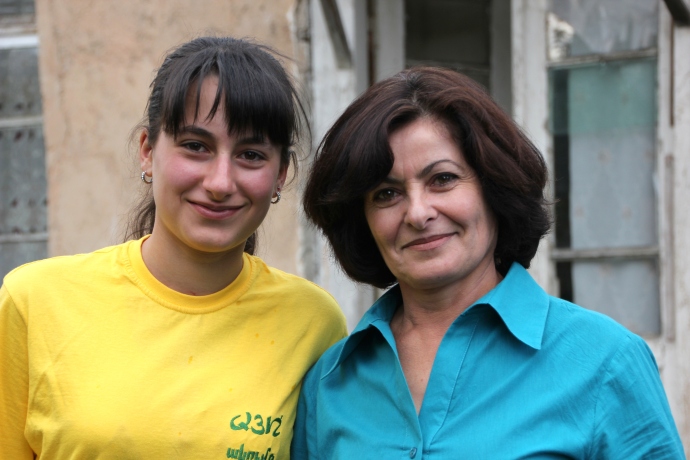 Metaqysa’s father is an accomplished beekeeper, and she chose the Business Direction because she wanted to focus on producing her own honey. After studying the market, competition, and developing a business plan, she qualified for a $100 loan from Heifer that she used for two fully-equipped hives with about 80,000 bees each. With favorable weather those hives will produce 20-25 kilograms of honey that she can sell at $6 to $7 a kilo.

Metaqsya has branded her honey A+A for “Work Advantage” (in Armenian) produced great labels, and is selling in direct competition with her dad, which he loves. She’s on fire to get more hives and once she passes on the $100 loan to another budding entrepreneur in December, she is going to ramp up her business and really get going.

Where the New Original Beautiful magic happens – around the sewing machine, of course!

The five 15-year old friends who have formed the textile collaborative New Original Beautiful are equally articulate, confident and enthusiastic about their business potential. They’ve enlisted David’s mom, a skilled tailor, to help them understand fabric, sewing techniques and experience, but the creativity comes from the fab five. Ani is the best sewer. Mariam likes to write commercials and do marketing. Vahan is the distribution guy. And David & the other Mariam make sure work gets done on time, savings are put away to pass on the gift of their $100 Heifer loan, and their pricing is right.

Picking the fabrics is Ani’s specialty (with David’s mom’s help).

Recently, they realized that the bed linens they were producing were not profitable enough, so they’ve moved into producing tablecloths, which are very profitable.

Their slogan: “We work during the day so you can rest at night” has proven to be very popular .. and even though they’re all just 15, they feel they are an unbeatable team and plan to have their own factory one day .. and sell tons of stuff in America.

What makes this particularly moving to me is the unvarnished excitement and full engagement of the kids. They can’t wait to talk about their big plans and what they’ve learned so far. Like teens everywhere, they’ve also had a trickle-up impact on the adults that work with them — like Osana, their YANOA mentor, who has evolved from a quiet housewife into a committed civic leader as she’s helped these kids develop enormous new confidence, vocabulary, ideas and perspective—and learned from them the feeling that anything is possible.

Armine and her son Ishkhan, 16, who wants to become a farmer and extend the family lands.

Instead of thinking they need to migrate or marry to have a promising future, these Armenian teens are learning they can develop a business in Armenia, be successful, and  control their own destiny. Says 16 year-old Ishkhan of Chkalovka, “Before we were counting on the state. Now we count on ourselves.”

(And to read more about MY beautiful Classy Weekend, click here...)